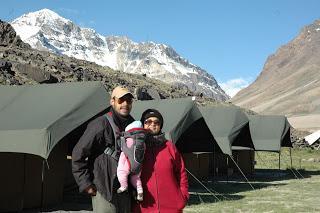 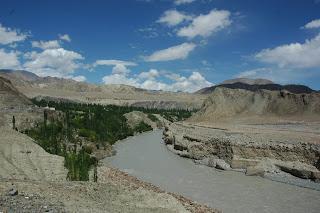 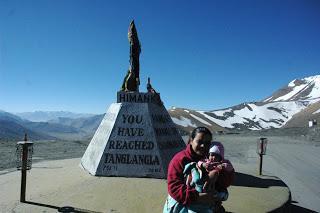 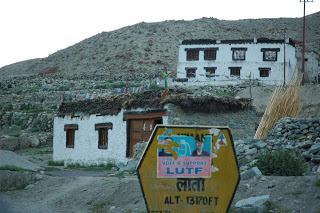 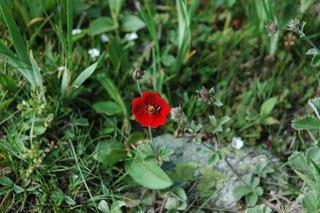 The valley approaching Keylong was full of lush green fields of peas, mustard and tomatoes. Small streams fed by the glacier, making their way to the river. Those who have been desperate for their mobile phones to catch some signal will finally be relieved to be in Keylong. It would be a good idea to take a breather to inform your near and dear ones of your whereabouts, otherwise you’ll only be able to do this in Leh next.

Jispa was one of my personal favorite villages. It’s very humble in size, beautiful lush green fields and the river flowing by the fields. It would definitely make a good stopover. In fact we were also thinking of halting in Jispa since it is the only low-lying area before we head towards Sarchu. The idea was to have a comfortable altitude with vegetation around, keeping Rubani in mind. There are a few good hotels and home stays in Jispa. However, we decided to continue until Sarchu.

Ahead of village Jispa, Patseo has a nice PWD Rest House and parachute dhabas (seasonal only) for overnight stopovers.

Just before approaching Barlacha La, we crossed two breath-taking water bodies- Deepak Taal and Suraj Taal. The later definitely calls for a picture or two. The colors of the water come out really well if you’ve been lucky to catch good light.

The road to Barlacha was rather smooth. Once known to be a notorious pass, was now a cake walk. I would like to mark a testimonial here for all the BRO men. You know what- they are the real heroes and I respect them. We took a small halt to capture few special moments of Rubani at 16000feet!!

Sarchu (average el. 4000 mts.) is the State Border between Himachal and J&K. One would only find camp stays or the parachute tents, no scope for home stays since Sarchu is not a village as such.

The winds in Sarchu get really notorious at sundown. The altitude sickness had hit me by then. I was feeling very spaced-out, nauscious and my head was ready to burst. However, I was told by “Pyarey” at Antrek Camps (our night halt at Sarchu), that it was only normal to feel this was due to the change in altitude and zero acclimatization. I could not resist a shot of Balantines offered by Joy, a fellow traveler. I would like to believe that it worked for me.

That night seemed really long. Rubani was not doing too well and did not sleep that night. I think the altitude must have had some kind of an effect on her too.

Staying and sleeping at Jispa is highly recommended for the parents travelling spl. with infants.

Sumit is been on these roads before by motorcycle or jeep and he was in care of Rubani in the night. I’m confessing that I had almost started feeling that this trip was not a wise decision. Somehow the night passed and so did all the discomforts. It would be a good idea to try and feed your baby whenever she gives a sign of discomfort and more importantly stay calm because it’s one hella long night! Next morning, it was a totally different, fresh and elated day indeed. I’m glad we could get some good pictures before leaving.

After Sarchu, the landscapes totally changes. One can actually start feeling the vastness of the valley. As we kept going higher and higher on the famous GATA LOOPS, which takes you over an eleavtion of 15302 ft.(464m at a distance of 7 km across 21 hairpin bends.)

We had to make an emergency halt at Army Transit Camp, Pang since Rubani had started showing signs of altitude sickness at Nakeela pass, (approx 15547ft). She became less responsive and I began to panic. She started feeling low and were going into unconsciousness. Sumit had no option but to give her mouth-to-mouth respiration. That surely did work. We knew that the closest medical aid would only be available at Pang -Army Transit Camp’s MI Room and that was still a reasonable distance away. In the meantime we crossed Lachulung-La, (approx 16616 ft) and made our way straight to the MI Room, Pang. Thankfully the nursing assistants were on duty and attended to us immediately. They checked her pulse and heartbeat. Both were normal and there came a big smile for Rubani to the three Nursing Assistants attending her!! Those guys were thrilled to have such a pleasant baby in their MI Room. That’s when I knew that my 3 month old was already a star. She was back and kicking!! Thankfully, nothing like this ever happened again. I’m thankful to all those Nursing Assistants at Pang MI Room, for their timing assistance and reassuring that she was absolutely fine.