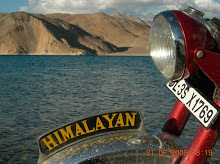 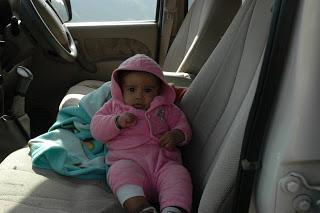 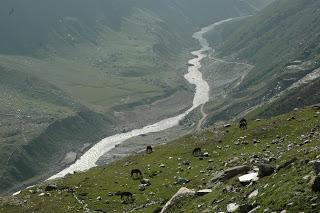 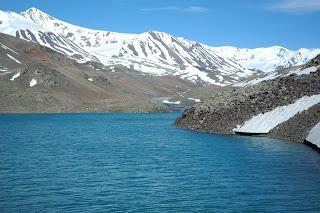 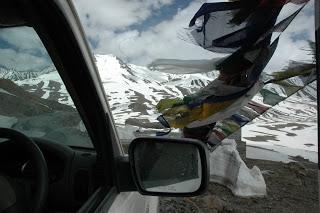 Who so ever said- “To each, his own” –was so right. It all began as a very casual conversation with Sumit (husband;) about doing a road trip. Not just a leisure road trip, but more specifically a Road Trip to the Trans - Himalayas (LADAKH) along with a friend couple from CHD in their new SUV.

Now, the only thing on our mind was our 3 month old daughter – Rubani. Volley of questions passed our minds- Is she old enough to travel such long hours? How would she cope with the sudden change in the climate? Are her lungs strong enough to withstand the low pressures at altitudes as high as16 - 17000feet?

We started looking for answers. The safest bet was our friend in Leh, who gave us an honest opinion that he has never had such a young baby traveler so far. So, he was not sure. Our second shot was Rubani’s pediatrician. He had just one word to say….Avoid. When asked why, he could not give me a concrete answer. Finally, our last resort was to “Google” it. Now let me be very honest here – Google failed in helping me out, or probably, a better way to put it would – I did not get any clarity from the net regarding infant travel to Ladakh.

We both sat down over a couple of beers and tried to analyze. We did a small reality check. Rubani was born 3.5kgs, healthy baby. It was a normal delivery. No health issues so far.

She’s completely on breast feed and is well acclimatized to altitude living, since we live at a height of approx. 2000mtrs and above in the Seraj – Tirthan Valley-Banjar-HP, in our village house at Ghyagi.

The only concern was to manage her breathing at altitudes as high as 16000ft, while crossing various passes. The only satisfactory answer we got from the net was that the baby’s lungs are fully developed by the age of 3 months. The lungs function thoroughly and there are no chances of any sort of abnormality thereafter.

A lot of beer, discussion and googling had already happened by now!! Finally, we decided to make our own experience. That was it….July 11th, 2009, 2A.M….we were on the road –
“A Journey to the Trans Himalayas”- with our 3 month old!!

There was no scope for negligence on my part while packing her bag. Enough warm clothes, diapers, medicines, blanket, toiletries and of course, my Nikon D70S SLR.

7AM, we were crossing Rohtang- the first pass, approx 3979mtrs(- 13051ft). The idea behind leaving home at 2AM was to cross the “touristy” Rohtang pass very early morning in order to avoid endless hours of jam. It was indeed a wise decision and we found absolutely no traffic. We made our first halt right after crossing Rohtang, before approaching Koksar, next to a parachute dhaba serving maggi-andaa. Now let me give you a brief background of Sumit. He will not stop the car until it’s absolutely the perfect spot. Come hell or high water!! But I have to admit that it has always been worth it. It was a 20 minute halt, good views of Chandra River and happy tummies.

The valley approaching Keylong was full of lush green fields of peas, mustard and tomatoes. Small streams fed by the glacier, making their way to the river. Those who have been desperate for their mobile phones to catch some signal will finally be relieved to be in Keylong. It would be a good idea to take a breather to inform your near and dear ones of your whereabouts, otherwise you’ll only be able to do this in Leh next.

Jispa was one of my personal favorite villages. It’s very humble in size, beautiful lush green fields and the river flowing by the fields. It would definitely make a good stopover. In fact we were also thinking of halting in Jispa since it is the only low-lying area before we head towards Sarchu. The idea was to have a comfortable altitude with vegetation around, keeping Rubani in mind. There are a few good hotels and home stays in Jispa. However, we decided to continue until Sarchu.

Ahead of village Jispa, Patseo has a nice PWD Rest House and parachute dhabas (seasonal only) for overnight stopovers.

Nice and helpful blog as I have a baby now and I love to travel to Himalayas .. but your blog looks incomplete would be great if you can post complete blog

There is a part 2 of the same blog, Rinki!