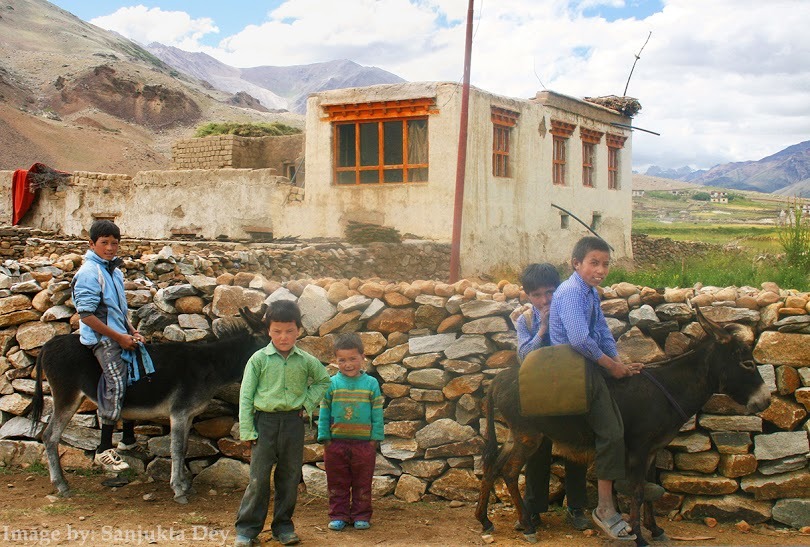 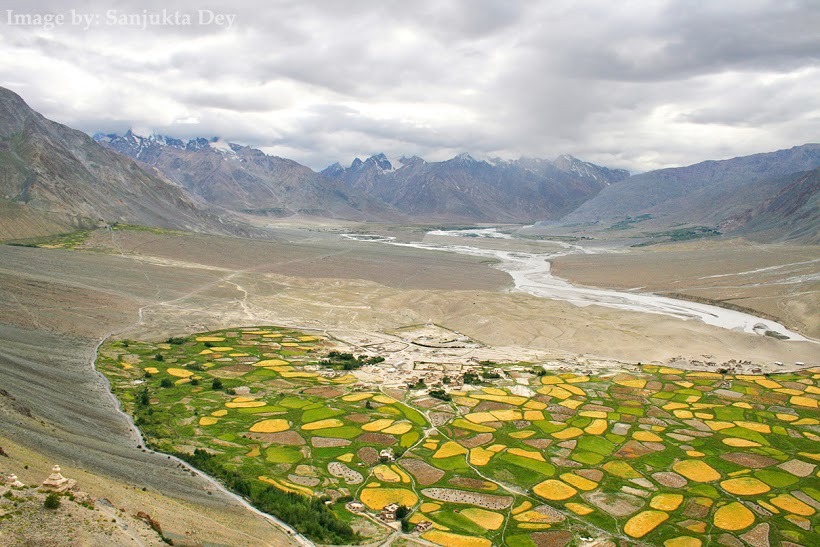 Irresponsible tourism in Ladakh has certainly contributed towards growth in local economy but it has also successfully destroyed some very important unique features of the region. However, major area of Ladakh is still untouched by tourist invasion, free from noise pollution, littering and various kind of assaults that result from zero knowledge and respect towards local culture and environment. The trans-Himalayan eco system is incredibly fragile and the last home of the Tibetan Buddhist culture. Situated in a rain shadow area, Ladakh since historical times had remained isolated, with only limited natural resources available. Some of the most remote villages are nothing but a patch of various shades of green, yellow or brown (depending on the stage of ripening and variety of crop planted) that lies on the slope or between the cleft of barren mountains. The village communities are usually very small consisting of 4 – 20 families, extremely tight knit, surprisingly prosperous and content. Often these villages share economic relationship (through barter system) and relationship ties through marriage.

Despite the fact that rivers like Indus, Zanskar, Tsarap, Stod, Lungnak are part of the geographical profile of this Himalayan Kingdom, drawing water for irrigation to these villages are not an option for practical reasons. The summer months are dry and warm but the winter months are bitterly cold with extreme snowfall. Summer is ideal for agriculture but the winter snow is crucial for crops providing irrigation water. Due to scarcity of water and depending on the nature of soil, crops like wheat, barley, peas, turnips, potatoes and buck wheat are grown (apricots, walnuts and apples only in the low altitude and in specific pockets). In some villages the goba or the village headman has surplus land to rent it to other farmers or employ paid labour. Excess crop is stored for future consumption and some is used as animal feed, while leftover barley is fermented to brew a mild beer called chang. Female yak, sheep and goats are reared for milk, wool and meat. a hybrid of cow and yak are used as draft animals. Cow and bull are new introduction in Ladakh but not many households in higher altitude prefer to rear them due to high mortality rate and expenditure. Some keep horses for personal use as a method of transportation or even let trek groups hire them. Donkeys are also kept by most families for carrying loads but small children often ride them to school and back as well.

Without any healthcare facilities available except in Leh and Kargil, most are dependent on the amchi who only specializes in the Tibetan system of medicine. Critical cases are referred to the lhabas or shamans. Apart from those who embrace monasticism, both female and male are married once reaching the age of 18-20. Marriage ceremonies are mostly not elaborate affairs and sometimes couples start cohabiting and are recognized as wedded husband and wife. Child birth happens at home, still born are not uncommon, many children born don’t live past their first birthday. However, people in general are fit and are active till old age. Although Urdu is the official language in the state of Jammu & Kashmir, it isn’t spoken traditionally. People usually only speak Ladakhi and sacred scriptures are written in Tibetan. Many of the literate males can read Tibetan compared to only a small segment of women.

My long association with some Ladakhi nuns was an opportunity to have been somewhat familiar with the local cuisine. The staple food of Ladakhi villagers are tukpa, which is a soup/stew of onion, dried cheese, dried peas, wheat flour, dried or fresh vegetables and even dried or fresh meat. Gyuma, which is a kind of sausage containing blood, spices, herbs, part roasted wheat and barley flour. Various kinds of bread like tagyi, tagyi taltak etc.; dumplings like skiu and mo mo, milk products like labo (fresh cheese), churpe (dried cheese), tara (buttermilk) and aoma (milk). Rice has only in recent years found place on Ladakhi cuisine as government provides the same at a highly subsidized rate.

The most popular beverage is soldja or butter tea, which is drunk several times throughout the day. However, with repeated efforts, could not acquire the taste for soldja (actually being a coffee person hate tea irrespective of the fact how it is prepared). Thus turning down the gracious offer of drinking tea while visiting houses in the villages, left me feeling deeply embarrassed and uncomfortable.

Small village houses are hardly ever more than two stories high, sometimes stone is used to build the first floor but main building material is locally handmade mud bricks. When dried, the walls are white washed with lime stone. The flat roofs are made with poplar beams with willow branches placed across. This is then covered with heather like shrub known as yagdzas which are said to last for very long; it is then packed with mud and earth.