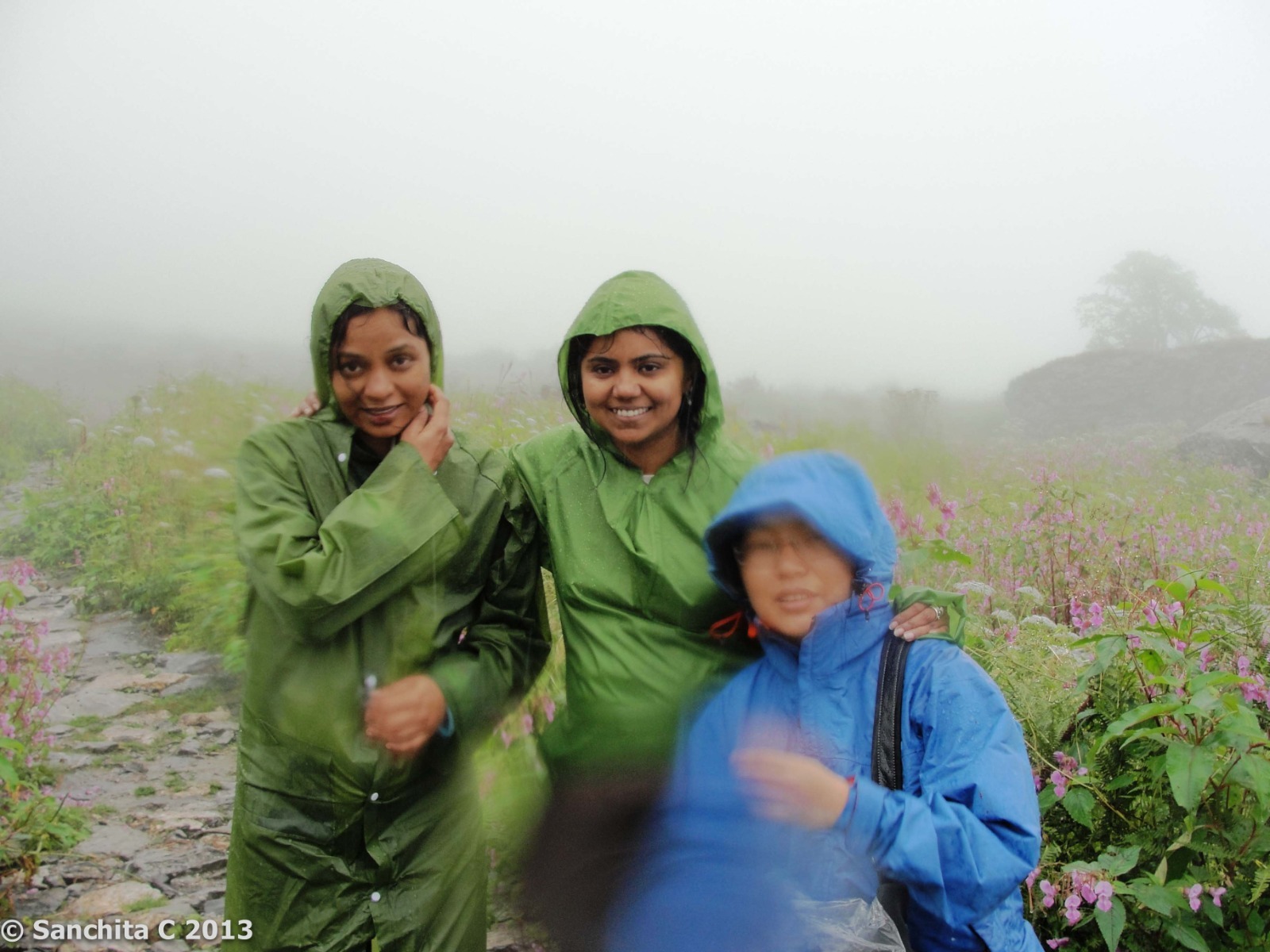 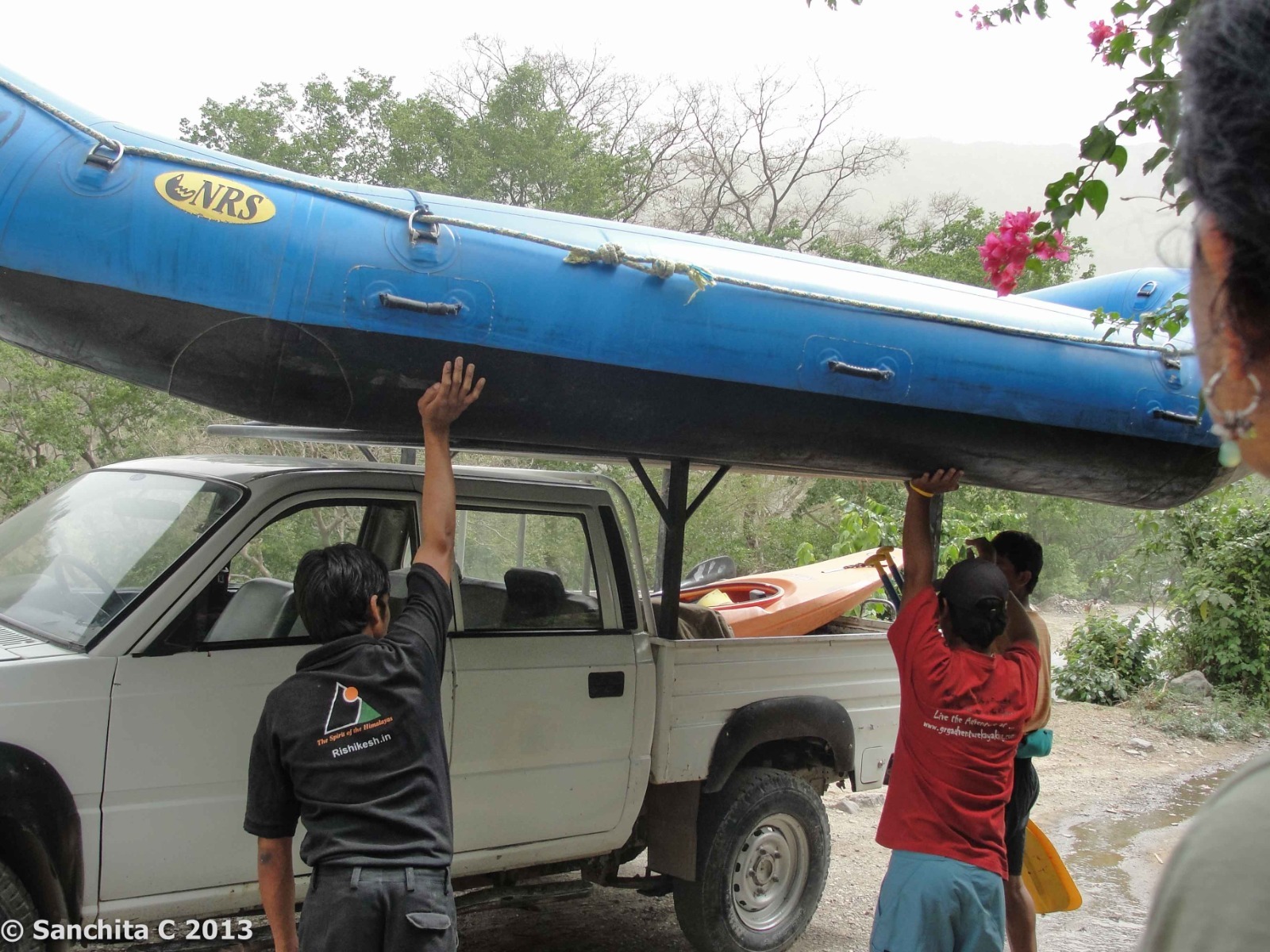 Renuka, Kevi and I were workmates and friends, and travelled to a few places together, sometimes with other friends. Whenever we travelled we wanted to do something extra – something, which we have not done before; something, which would challenge us mentally or physically or both. Among those travels were two in Uttarakhand: river rafting in Rishikesh and a trek in the Valley of Flowers.

Discovering our own little space in Rishikesh
White water river rafting in Rishikesh is quite a popular sport by now. Almost every other week I see photo updates in social networking sites from people, who have been to Rishikesh in groups for rafting. In particular, it is a popular ‘team building activity’ in office outings. The idea is that a group of people rowing a raft in rough waters and trying to survive would bring them closer.

The three of us did not have any such aim. We simply wanted to have a new experience. Since I did not see any other small team of lady rafters than us, guess I can safely say we were already doing some thing different.

It was May 2010, we took a late night train from Delhi to Haridwar. Before moving on to Rishikesh, we roamed around a bit in Haridwar, drawing in the spiritual solemn ambience. It was my first visit. From Haridwar we took a big auto (three-wheeler), which we shared with many other people, to go to Rishikesh. My memorable moment of the auto journey was a conversation with a holy man – a Sadhu – about many uses of marijuana plants. Marijuana grows profusely in the Himalayas as I learnt in my travels to this region. We had go to a bit further up north from Rishikesh to stay in a cottage. In Rishikesh, a car from the cottage picked us up. The cottage was slightly high up in the hills while most people stayed in camps around the ‘beaches’ of River Ganges. We were basically the only ones in the cottage. Not that it bothered us.

The next day we were ready in our waterproof shoes, shorts and t-shirts, and with lots of sunscreen lotions - just as recommended by the company, which organized our trip. We had some Canadian (or perhaps Australian, I forget which) boys and girls as our co-rafters. It was quite enjoyable. Especially enjoyable was being splashed with water when lying down on the head of the raft. Our co-rafters were occasionally diving in the ice-cold water and going for a swim. We had paid for a longer journey so there was a change of co-rafters at a certain point. The next bunch – a group of Indian guys – happened to be much less adventurous than the earlier one. Suddenly we were not enjoying as much – we realised the company makes a huge difference. At the end of our journey – in Rishikesh – the three of us - very wet and excited – were again picked up a car from the cottage and brought back to our place of stay. This time we had a French woman as a co-passenger.

The next day, we were ready to something less organised and planned, and more off beat. Since there wasn’t much else to do, we went for a walk. Soon we were climbing down the hills through a jungle towards the river. There was a light, gravelly track in the beginning but after a point we were pushing away branches and small plants to climb down. After about 20 minutes or may be half-an-hour of climbing we reached a small empty space by the river. There was no human soul in sight on either side of the riverbanks. We were ecstatic. We finally found a space of our own. We did something different. The beach was covered with gravels, stones and boulders. We decided to dip in the chilly water. Soon the realisation dawned we were not completely alone. Occasionally, rafts would pass by but from the other side of the river. The current of the river at that spot was such that navigators would take the rafts towards the other side. The river was wide enough so we couldn’t see the people in the rafts very clearly. We still had our own little space to ourselves. The rafters, who did spot us were curious to see three women almost in the middle of nowhere, dipping in river water.

After being in the water to our hearts’ desire, we started walking back but using a different route. Soon we reached the cottage – happy and contented. The next day we three returned to Delhi while planning for the next trip.